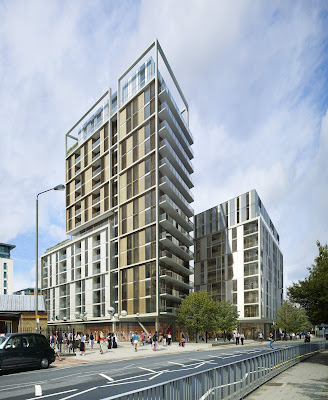 It is one of the great scandals of the early 21st century in London that we have allowed so much of this kind of crap to go up all over the place. It's quite difficult for the untrained observer to understand why this happens. After all, anyone can see that this proposal is an utter dog.
But somehow, if you mix in enough different materials, put some panels of timber in random places on the facade, give it an active ground floor (that will in fact remain unoccupied for ages), and then stick a funny hat on the high bits (as if this made the towers somehow less offensively engorged) you can rely on planners to become snowblind, and wave it on through.
This works best if you are one of the following architects: HTA, Stock Woolstonecroft, EPR, PRP or Levitt Bernstein.
I am hoping to god that this project, for 829 flats, has become comprehensively credit crunched, to save the inhabitants of Buckhold Road from EPR's deadly 'urban square' and its appalling "landmark" towers. 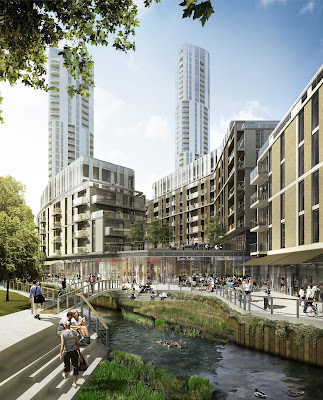 Note to EPR. A building doesn't count as a landmark just because it is loads fucking bigger than anything around it.
Posted by Ghost of Nairn at 02:39