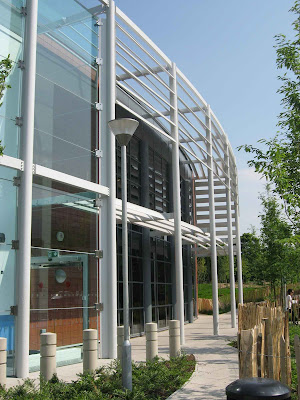 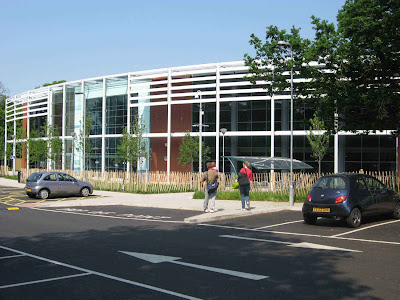 I blame Norman Foster for this. Admittedly, he used to be a pretty good architect, but the problem with the British high-tech masters of the universe is that they delighted in creating problems they then had to solve with great rhetorical flourish and fake functionalism. Which brings us to to this little number.
What kind of architect decides that a really transparent south-facing facade is a good idea (I assume it's south from the angle of the shadow of the tree in the second picture), and then, on discovering the greenhouse-like environment he or she has created, decides to ring up Levolux to sort it out with a few louvres?
Well, this kind, clearly. Then Burke Rickhards goes crazy with the whole high-tech classicism thing, making a symmetrical facade with a fake colonnade (said Levolux construction). This is just ordinary, perverse, weird architecture with no character, craft or guile. Somewhere in the DNA of this building is Foster's Carré d’Art in Nimes, but so mutated as to be unrecognisible.
Also, check out the number of bollards in front of the glazed central portion of the facade, presumably to stop a Glasgow Airport-style terrorist attack. On Sidcup Leisure Centre. This is another problem, created by the architect, solved by a cack-handed highway engineer and as a result littering the public realm with more unnecessary flotsam.
Posted by Ghost of Nairn at 19:31