THE LOCKHOUSE, CAMDEN, LONDON BY PKS ARCHITECTS FOR BARRATT 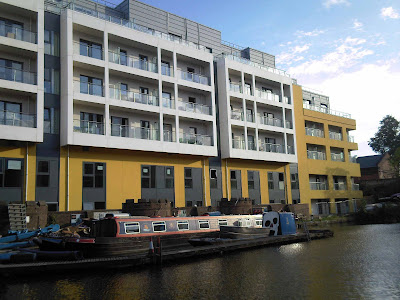 This might look like the usual crap to you: piss-coloured render and a characterless window system with some white supercalamodernistic projecting balconies and profiled zinc that's supposed to make us believe this isn't really a six-storey building hard up against the canal (the zinc's a roof, you see...). But this one is emblematic of a wider malaise.
There are lots of shocking things about British housing in the first decade of the 21st century: the shoddy materials, the inappropriate density, single-aspect flats, and the multiples required to make a profit driving awful, lumpen urban forms. But another shocking thing is how we are sold a vision, that can then be watered down (after planning) by an utterly cynical developer until it is nothing like what we imagined it would be. Below is PKS Architects' first attempt at this scheme, in a form that was exhibited at the New London Architecture Gallery. 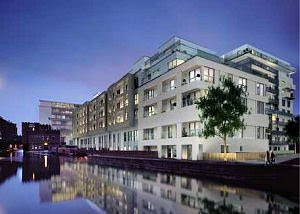 This is a poor quality image, and despite this still terribly clumsy and obviously oversized proposal, at least it was painted white (a bit like the warehouses further along the canal), and there's the suggestion of timber on the projecting sections. Ther emight even be some public space implied along the canal front. What it turned out as, you can see at the top.
Actually, none of that really makes any difference, really. It's still absolutely awful in a anaesthetised, run-of-the-mill kind of way. This dull, stupid building will now afflict the canal until after we're all dead. Thanks PKS and Barratt.
Posted by Ghost of Nairn at 17:53