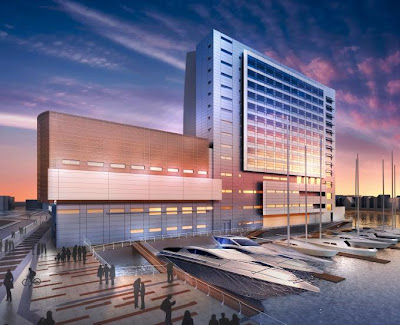 Southampton was where the Titanic sailed from. It undoubtedly was and still should be a great maritime city. But weirdly, it seems to have the fugliest set of hotels of any city I've ever seen. The picture above is not, to be fair, by HKR Architects. This eyesore is by WATG, or Wimberley Allison Tong and Goo, American designers of Las Vegas casinos and resorts around the world that look like the palatial homes of African dictators. When they got to Southampton, they decided to propose this, whose subtle form is inspired by a thick slice of bread.
Even the good burghers of Southampton wouldn't put up with that, so now (barring recession) they're getting this, which is by HKR: 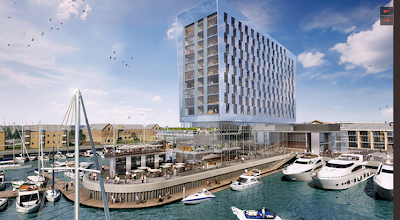 Look, they've made it completely transparent! It's the Predator building, and therefore impossible to complain about. In this image, I'm really enjoying the lengths HKR have gone to to integrate with the vernacular-style housing on the left hand side of the image. The architect has also caught slippy-slidey-windows disease from Allies & Morrison, and has let it rip on the flank facades.
HKR has integrated one remarkable feature into this building, which merits a 'concept drawing' all of its own. 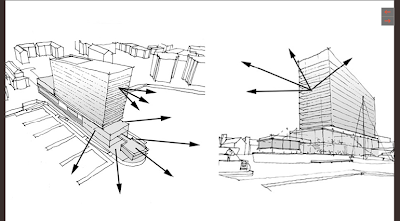 It has windows! Which people can look out of. I think you'll agree that the above picture truly does paint a thousand words.
While researching this post, I happened upon some other stupendous hotels in Southampton, which I just had to include. I once went to a conference in this one: It's the De Vere Grand Harbour hotel, and it's quite near the station. It looks like a shit-brown, postmodern Brunswick Centre with a big glass pyramid fucked into it. As far as I could tell, the building is mostly made out of mastic. Imagine talking to the architect. What would be your first question? 'Oh, yes, I know that building. It's really... you know... contemporary.'
By the way, read this review of it in the Telegraph, which is a better piece of architectural criticism than I could muster.
To get to the De Vere from the station, you walk past this:
It's a Novotel hotel doing an impression of a giant, new-build crack den. What you can't see in this picture is the beige concrete blocks of the cladding, which are discolouring horribly and should be condemned. It's simply incompetent building, let alone design. I can't find the name of the designer, and I'm guessing the builder just made it up as they went along.
Finally on the Southampton hotels roll of shame, a Jurys Inn, whose ungainly bulk is in no way mediated by the attempt of the architect to 'break it down' into rectangles in varying shades of beige: 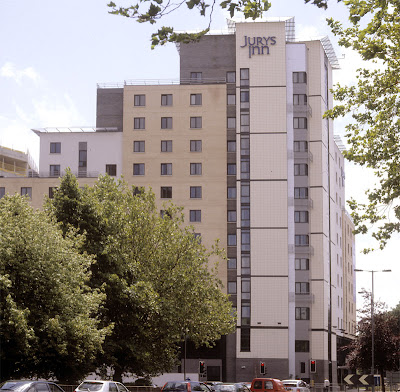 What is it with this city? Southampton is a tourist hell, actively trying to keep tourists away with comedically bad architecture. Perhaps there's a Pompey fan in the planning department.

Many thanks to @tragedyhatherle for the suggestion at the top, and you can read his infinitely more coherent thoughts about Southampton here on his brilliant blog.
Posted by Ghost of Nairn at 19:39