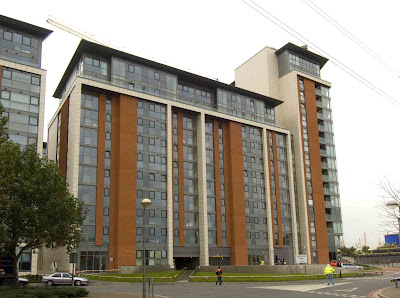 Eurgh. This one's just horrible, isn't it? This is executive mass housing done on the cheap, tarted up with a 'landmark tower' (say the architects) to try to suit its dockfront location. But they forgot that the gunmetal sky you see here is pretty typical of east London, and all hopes of transparency in glazed facades founder under its relentlessness. It's just grey.
One point on scale. Although Docklands is a high-rise environment, that doesn't mean you can just take a four-storey design for an apartment building in Slough off the shelf and stretch it a few storeys. And the trend for little hats on buildings is now so ingrained that we almost don't notice it, but isn't it strange? Clumsily set back upper storeys will be a kind of defining legacy of 1990s architecture in this coutry.
Sometimes, Docklands can feel really impressive in a 1990s corporate video kind of way, but there's always a cheap piece of crap around the corner that destroys the effect. That piece of crap will usually either be by CZWG or by this lot, RMA Architects. RMA has built a load of terrible buildings in and around Docklands. In this case they took an existing planning permission by Squire & Partners (not the world's most gifted lot themselves) and made it cheaper until it was really horrible to look at. Then they built it.
Posted by Ghost of Nairn at 18:35