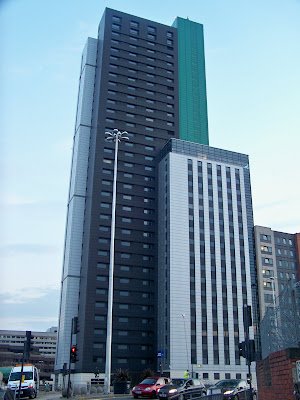 This is a recession, which means that land values are lower than they were, which means that student housing developers can afford to get in there and build some shit buildings for young people to live in. Then, the poor students get overcharged for the privilege of having sex and throwing up and setting off smoke alarms in an eyesore.
Unite is the developer of this building, and they're responsible for loads of shite in cities all over the country (this one in Manchester looks like an old people's home, this one in Edinburgh is a shit bit of Scottish contextualism and this one in London like 1980s housing for people likely to harm themselves). Unite is by no means to only developer doing shit buildings for students, and this will not be the last student residence to appear here.
Sky Plaza, above, is in Leeds, and is the tallest student housing IN THE WOOOOOORLD as if that is either here or there. 37 storeys. 103 metres. Look at the pic above: the buildings next door are pretty big. This one's a monster. The proportions are fat and deadening as the lumpen mass of it obnoxiously blots out the sky.
The composition of the facades, or lack of, is, in my experience, what really distinguishes bad architects from good. Bad architects don't so much compose facades, as choose a pattern and use a tiling command to extend it across the whole facade. When they do try to design one, this happens.
Here, Carey Jones opted to make loads of tiny windows march across the facade with a monotonous lack of verve. 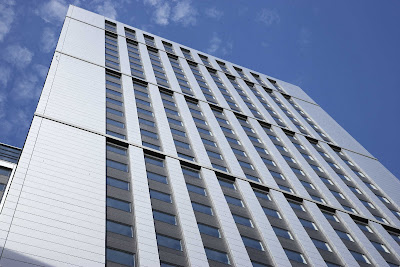 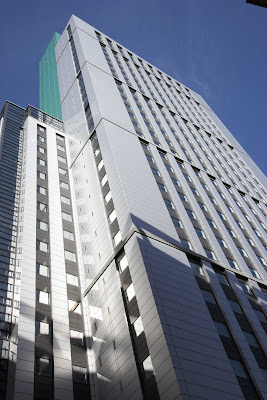 When the architects at Carey Jones were students, do you think they dreamed of doing buildings like this?
Posted by Ghost of Nairn at 16:54