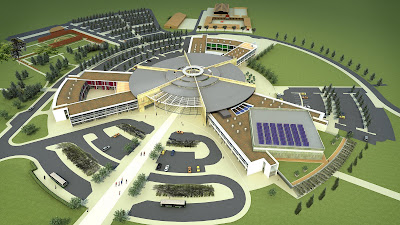 Despite the funding falling through for almost all further education colleges in the country, Oaklands College in St Albans is so desperate to build this beauty that it is going to put up the money itself.
The college has already spent £12 million on professional fees and taking the building through a public enquiry (successfully) after the proposal was called in by the secretary of state. Now it wants to spend another £100 million inflicting this strange catherine wheel of a building on the landscape in reality.
I really like how carefully the architect has thought about the parking, so that the building relates to the landscape around it about as well as an American supermall might. This building was called in because it was in the greenbelt. What on earth made the government decide this was ok?
I think someone at Bond Bryan has been spending a bit too much time with his or her mandala.
Posted by Ghost of Nairn at 17:38