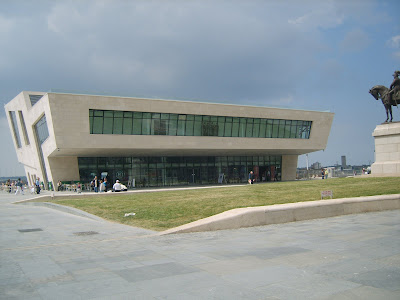 Hmm, I wonder what they've been putting in the tea at Hamilton Architects? The practice has what you might euphemistically describe as a 'mixed' portfolio, ranging from fugly Georgiana to a plasticky hospital. But here they were clearly given a bit of a budget, and decided to give free reign to their frustrated avant-gardism.
It riffs on the new (and nearby) Museum of Liverpool by 3XN, with a stone-clad slightly angular form. they've then gone ahead and made some hideously ill-considered glazed cut outs that collide horribly with the already deeply questionable geometry. 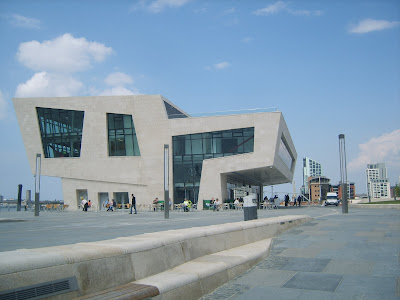 This building is what happens when a bad architect reads a few too many architecture magazines, and think that doing shapes is a good idea. The result is this anti-context, anti-scale, uncivilised building, exuding a staggering lack of decorum on the benighted World Heritage Site that is Liverpool's waterfront.
When shit practices do shapes, it also reveals the absolute stupidity and rampant subjectivity of architecture today. This was the winner of an international competition - the jury probably thought they were getting a B-team Libeskind or something.
Liverpool people will be relieved to hear that the programme of this building is an absolutely essential addition to the city's cultural landscape - a second Beatles Museum. The museum promises a "magical journey through the music of the Beatles, complete with motion, sound and water". Sounds like a museological fucking revolution.
According to the architect, the building has become popular with 'photographers' because of its 'quirky' 'angles'. Unfortunately, as you can see from the photos above, it has become popular with really shit photographers, who barely know how to hold their cameras up straight.