SPOT THE DIFFERENCE, BY ARCHIAL AND THE UNIVERSITY OF BATH 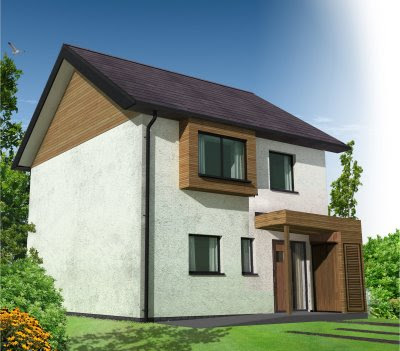 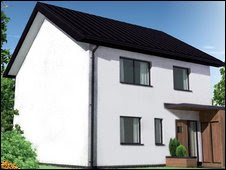 Well, well, well. Archial appears to read our blog. The BBC has covered its proposal for a 'sustainable' house made of Hempcrete (as if it's the first time anyone had ever thought of it). But Auntie said that the proposal was from the University of Bath, rather than this blog's favourite shit architect. We, dear reader, know different.
The image that the BBC ran (the second from the top) is a little less architect-ed up, but it's the same old shit. Archial/Bath Uni couldn't even be bothered to change the angle of the visualisation. The thing I'm sure about is that they saw our comments about how bad the render of the render looked, and took the Tipp-ex to it. Now we have a pristine, white 1980s executive home rather than a slightly grey one.
Thing I'm wondering is, which one came first? Did they add the timber adornments to charm the design press, or did they remove them because the BBC wouldn't understand the architectural sophistication of the timber proposal? What did Archial pay the University of Bath to keep its name out of the frame for this hideous concoction?
Whoever created the BBC version even toned down the lens flare. Which reminds me...
Posted by Ghost of Nairn at 22:09