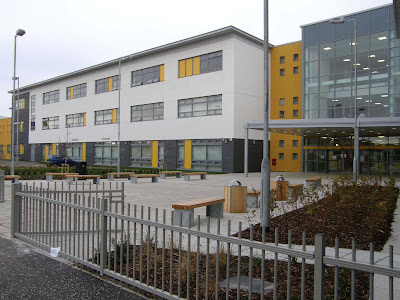 This is just deadly, isn't it? This is an academy, the pride of Britain's schools system. The academy programme has created a generation of buildings that by and large are made of render, in white and coloured panels, designed by terrible architects like Ryder who treat them like just another developer piece of shit.
Like this one, academies often have glassy atrims to try to look less forbidding and more democratic than Victorian schools, but usually end up looking like they should be on a low-rent business park somewhere in, er, Ayrshire.
I like to imagine what the conversation in the Ryder office was like when they chose where to put the yellow panels in the wing on the left hand side. 'No, a bit left.' 'Put three yellow bits in that one." "Move that one a bay to the right." "That's it! Perfect."
The public realm outside has been comprehensively galvanised, with only the bits of timber on the benches giving a hint of what might have been.
Posted by Ghost of Nairn at 16:59