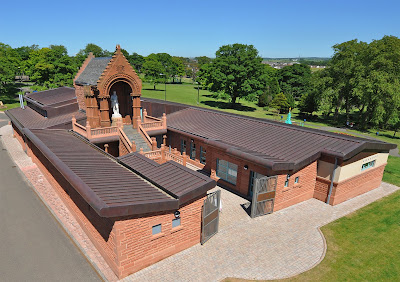 Wow. This is one of those projects that the local authority architect thought: "I can do this. This is my big chance. Those fancy-dan architects from Glasgow/London will finally recognise the genius of us Ayrshire natives." So the local authority didn't have a competition, didn't take any advice and went with its own, terribly untalented architecture office. The result is this embarassing lump of sandstone, stranglingly enclosing what remains of a listed monument.
The Robert Burns monument used to be a charming and slightly mad folly of a tower, which burned down in 2006. It was in sandstone, with a mad mixture of Scots baronial, neo-gothic and baroque providing a suitably romantic/absurd setting for the Scottish bard's memory. For its replacement, the designers went with slopey-roofed shit-bikeshed style, with a liberal dash of Kalzip and a touch of Hackney Marshes changing rooms (the old ones). 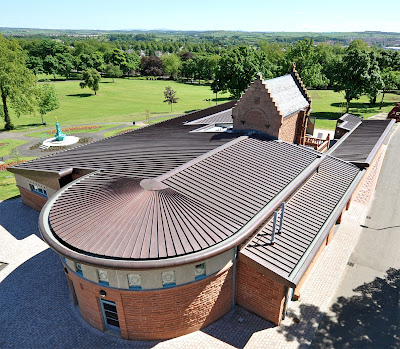 Really loving the powder blue window frames, guys.
Many thanks to 'anon' for this one.
Posted by Ghost of Nairn at 18:39